Today is 112 market days from the 3/23 low.
Check for consistent ranking within the past 21 days for new commitments OR Jack’s 5-10 day rule as he explained in the session on 8-25.

Friday’s closing macro data is 5 of 5 confirming commitments to equities.

Daily, I monitor DJIA, S&P, COMPQX, VIX and the futures for gold, light sweet crude, lumber and the US$. The trend for the indices remains upwardly biased. The dollar declined supporting international allocation and possibly supporting metals moving up through resistance.

The trend is our friend until it ends. 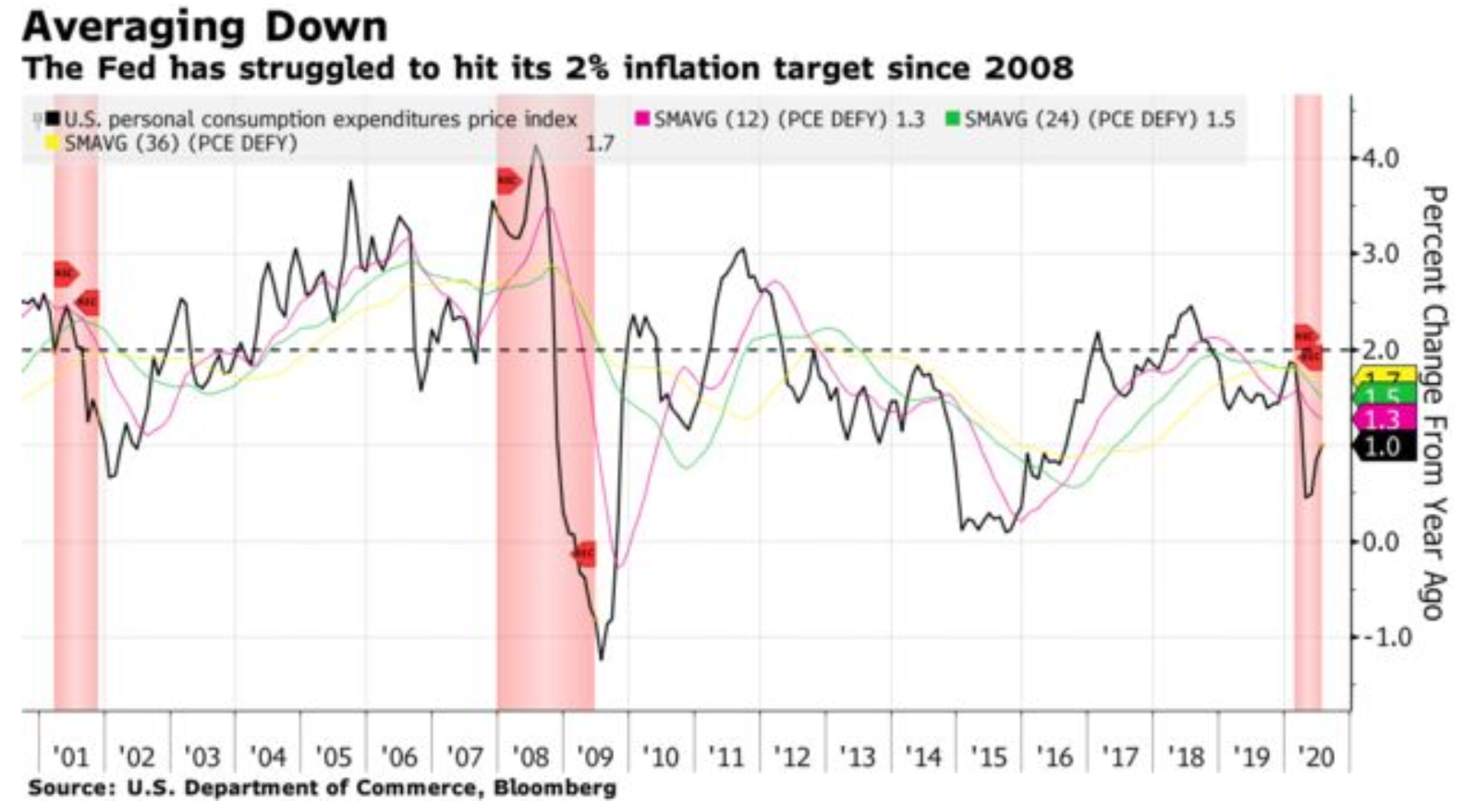 Following up on last week’s decision by the Fed to change inflation targeting process to average results.

This raises the similar error issues in MPT’s use of averages.

The Fed has a poor success record in achieving the goal of 2% inflation. Further the Fed’s “new deal” will “engineer inflation” instead of waiting for an overshoot.

To paraphrase Admiral Farragut: “Damn the (debt)… Full speed ahead.” President Macron of France encourages the ECB to maintain “as much as it takes” policy or face deflation and political chaos. 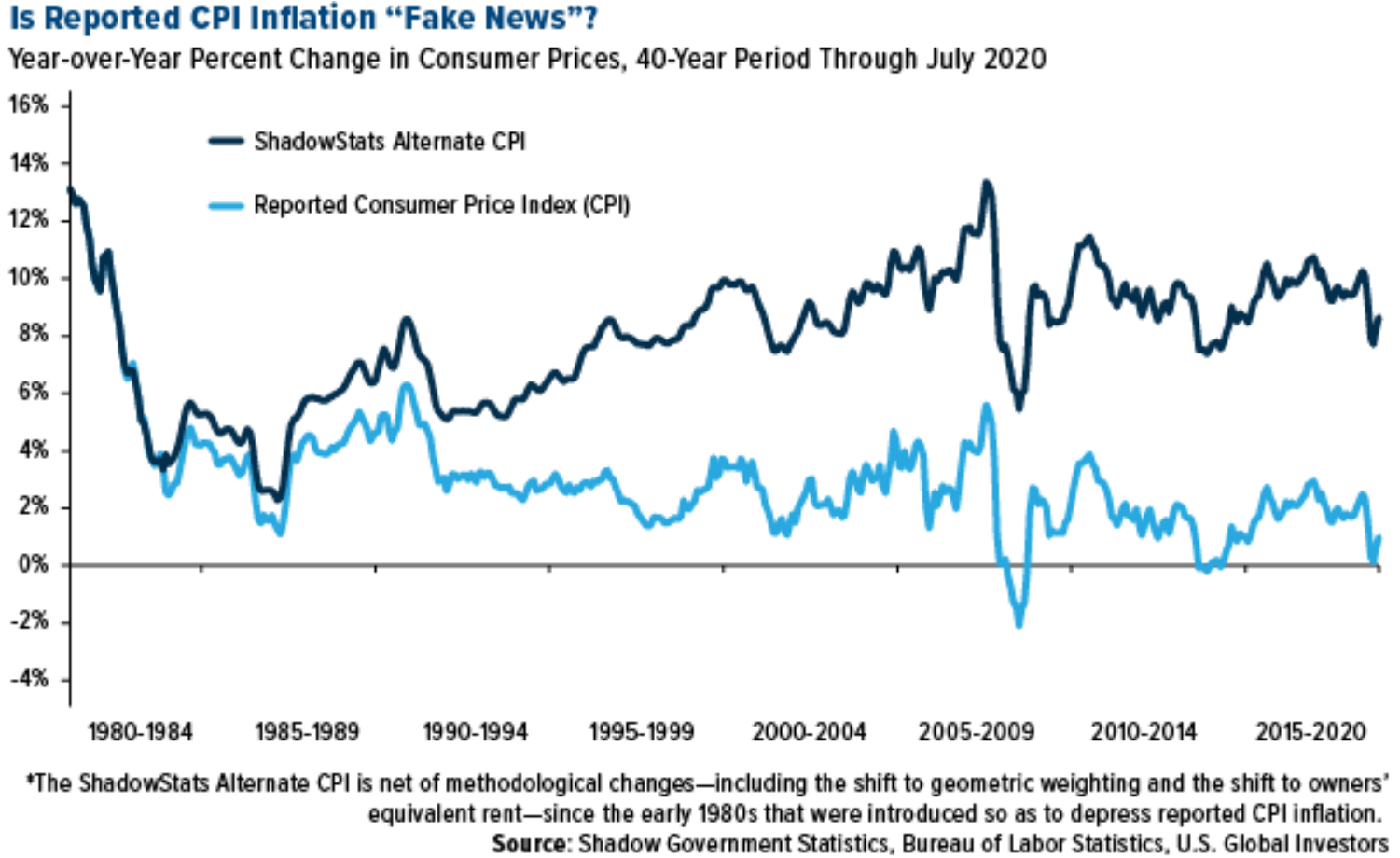 Unresolved, what will the Fed use to track inflation.

Central bankers seem to be united in a common policy generating financial bubbles and increasing the division between investors and all others. Federal Reserve “staff judged that asset valuation pressures were notable.” Read that as “bubble.”

Previous updates have documented the Fed’s expanded balance sheet has not resulted in greater loan volume to businesses.

Historically, the result was expanded capital expenditures and hiring. Not so in this cycle as investment banks have held back the funds for loan losses and increased liquidity for their proprietary trading  desks. 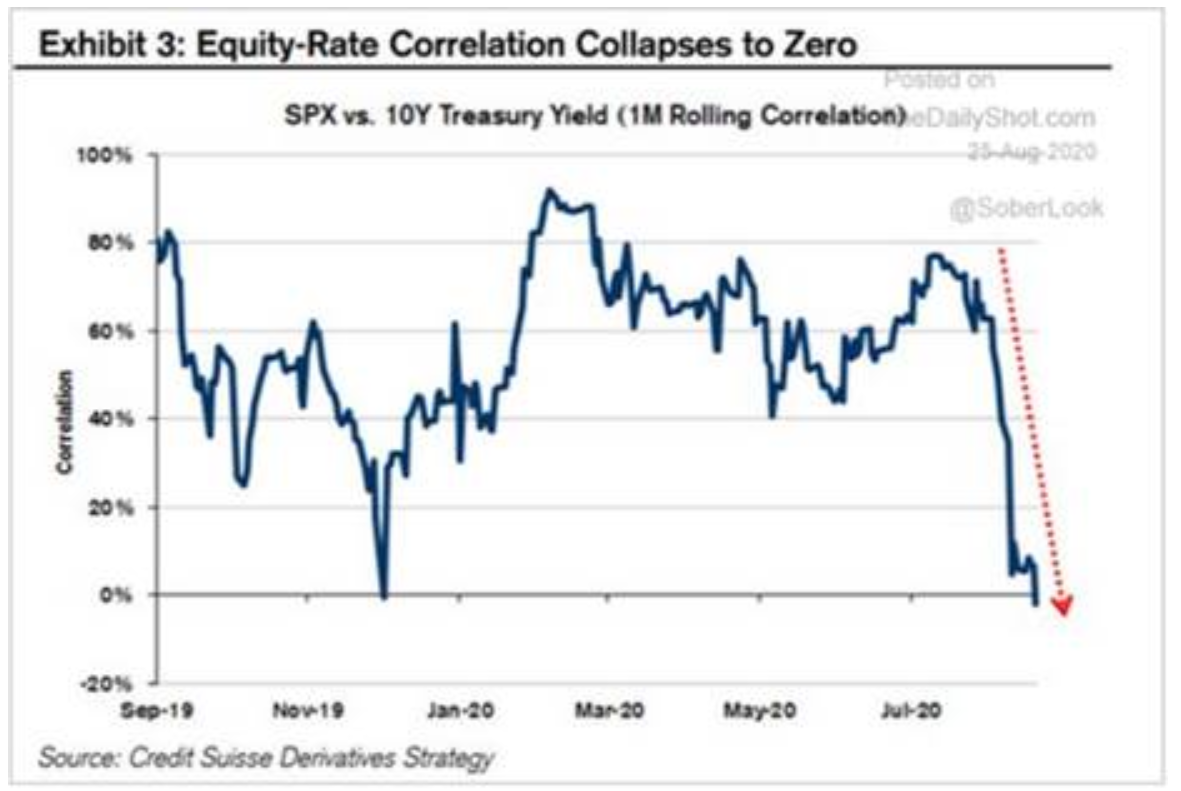 The theme of Saturday’s radio show was risk. The assumptions of a balanced portfolio are now trash since portfolio structure requires static correlations between stocks and bonds.

With the S&P and COMPQX pushing through all time highs, there is no point of resistance above from which to judge the next move. With correlations 1:1, the benefit of stock:bond diversification is negated. Risk management requires technical processes as taught in No More Pies conferences.

VIX has remained low though close to breaking above August 11 resistance. VIX futures, however, are higher for November than any of the three prior Presidential elections. Plan on volatility.

“Que sera sera. Whatever will be will be. The future’s not ours to see.” Which is why we have a process to exit back to cash when the current trend reverses back to the downside. 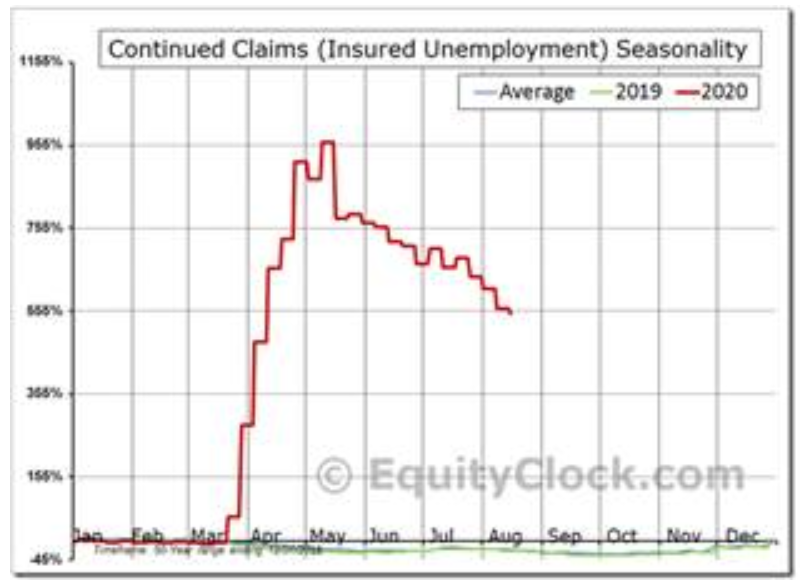 Continued claims are now down by 2.9 million in the past month.

The total number of continuing claims is 548% higher year to date, but the decline is a positive trend. If it continues, economic recovery data will improve though more slowly than hoped for.

Last week I mentioned Capital One’s across the board cutting of credit limits.

It may be due to their total credit quality risk though I have a report of the cut for an individual with a high credit score. If expanded to other banks, consumption will likely take a hit.

Monthly monetary velocity is falling. Again, as I have reported, the Preferred Dealer Network is sitting on the cash they have from selling Ts to the Fed. It is not being lent out.

The rate of money circulating in the economy is declining. Extending QE will more likely result in more stock speculation and begin raising inflation.

The conclusion of my data is that market bias remains positive. When that changes, we will shift back to risk off as in previous declines and most recently, February. The market’s historic over-extended condition suggests that a larger-than-normal decline will become bear market 18.

Today is 111 market days from the 3/23 low. Check for consistent ranking within the past 21 days for new commitments OR Jack’s 5-10 day rule as he explained in the session on 8-25.

T2107 shows the number of stocks above the 200-SMA is stuck in a trading range this month around 45%. Trading range is the common condition of stocks and sectors. The favored members of the indices are the exception.

Speculation in a few large cap stocks during a recession is not normal. The winners are companies with services addressing WFH and other needs of people and businesses dealing with extended isolation. I expect the indices to remain within trading ranges holding an upward bias – not due to broad support but due to the leadership concentration. 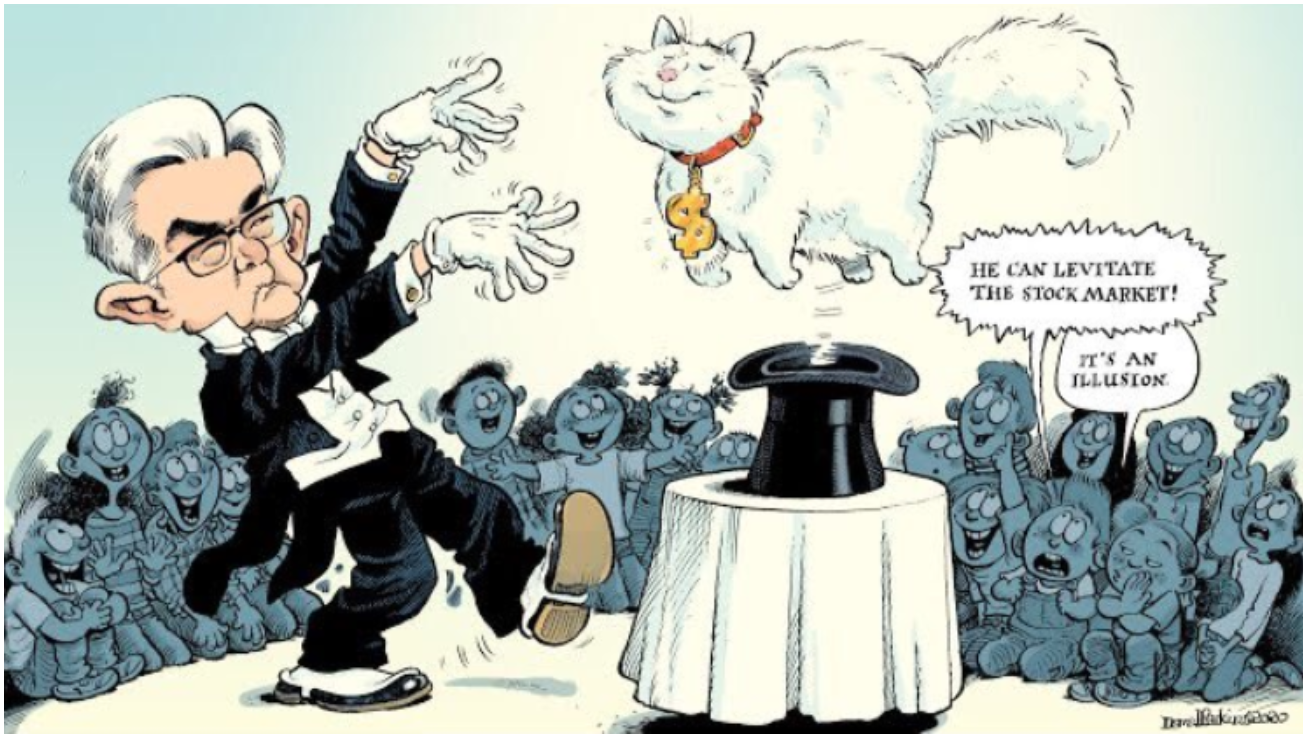 As if the Fed has been able to generate inflation, its collective wisdom has concluded that above target inflation will be acceptable as compensation for persistent lower levels.

Now they will debate if the average is adequate before raising rates. This is a negative for the long bond. The Fed’s policy evolution indicates more active adjustments but continued liquidity injections favoring investors while attempting to generate jobs and wage increases. (We think it will work this time).

Job creation is job one at the expense of price stability.

A clip from the speech. 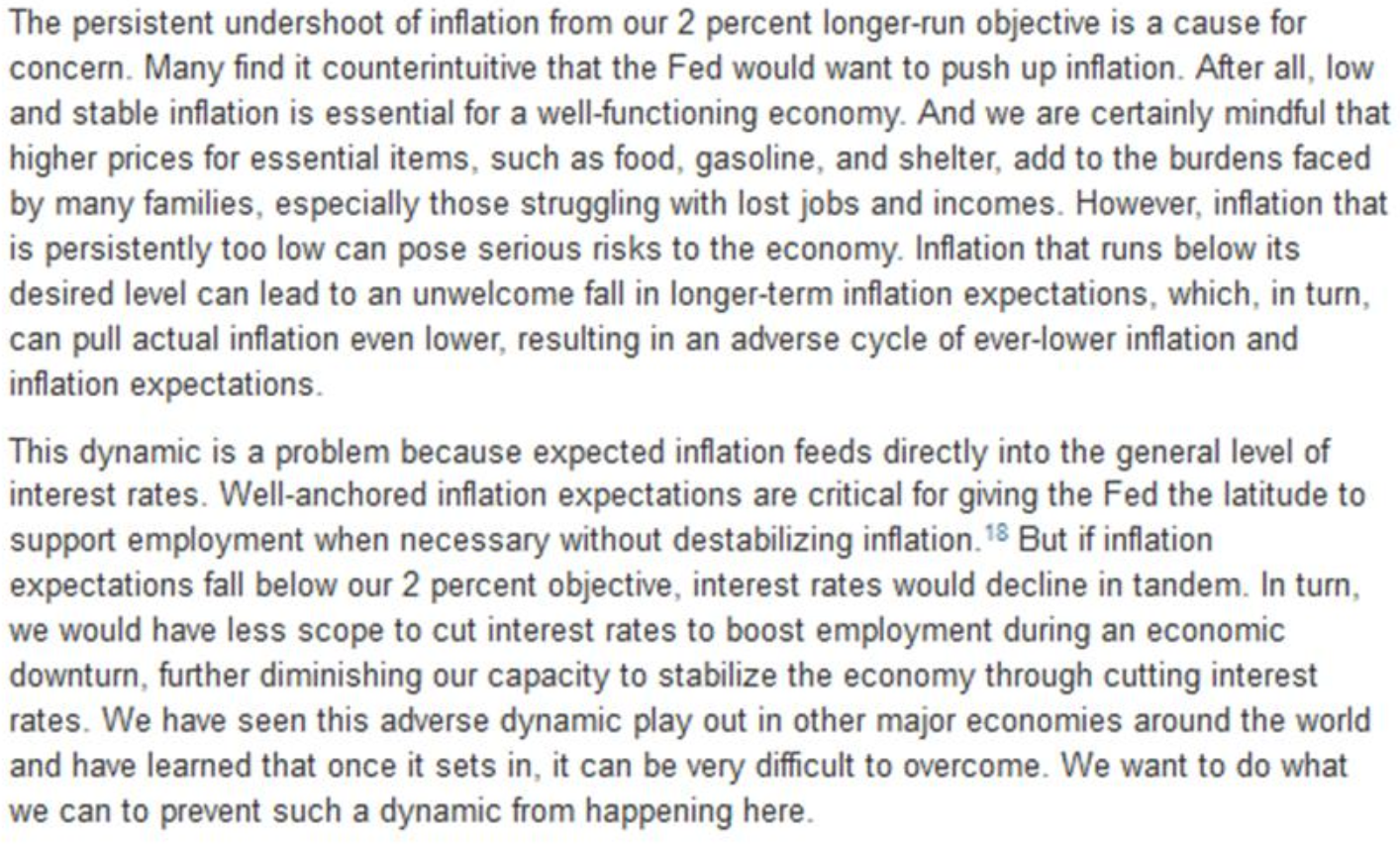 Back to demographics, will Boomers moving into retirement still outweigh other cohorts? If so, the Fed is facing an uphill battle.

Revision of Q2 GDP from -32.9% to 31.7% reflects improvement but remains the worst since the Great Depression. Tracking unemployment looks similar to the volatility of a market index – improving with uncertainty. It is difficult to know if improvement is a result of new jobs or expiring benefits along with people ceasing their search. Likely, it is a mix.

Restaurants, with low margins and often arbitrary government restrictions on occupancy, have difficulty finding staff even with wage increase. “Free” government subsidies are an incentive to not work.

Without increasing job prospects, the ability to repay debt suffers. Capital One is proactively cutting credit limits on its cards. The Association for Corporate Growth, a group that lobbies for middle-market businesses, says that 81% of businesses failed to get a loan through the Fed’s Main Street Lending Program. Updating an adage learned in the ‘70s. “When you don’t need a loan, the banker is your friend. When you do need a loan, not so much.”

The charts of VIX-X & VNX-X show upticks. Breaking above resistance will be reason for caution.

Today is 110 market days from the 3/23 low.
Check for consistent ranking within the past 21 days for new commitments OR Jack’s 5-10 day rule as he explained in the session on 8-25.

Speculation pushed the Nasdaq and S&P 500 indexes to new highs while the majority of issues traded lower. HFTs were active though I saw little DP activity in SPY. Momentum scans were so low they reveal little. Weekly volume continues falling since the March low which is not supportive of new highs. Cumulative on-balance volume does support the up-trend.

Negative numbers have been declining over the past one and a half hours.
I expect the three major indices to trade within range maintaining an upward bias.

Selling bonds to buy equities suggest the marginal buyers are ignoring over bought territory pushing S&P towards 3550. Trying to find a reason for NFLX to rise 11%, FB up 8% and CRM gaining 26% in a single session without major news suggest reason has “Gone with the Wind.” Perhaps new investors have been reading Ps 40:2-3 – “He also brought me out of a horrible pit…. He has put a new song in my mouth.”

Prior to the Fed’s comments today, expectation is for a policy of near zero interest rates for five years which is not an optimistic view of prospects for economic recovery.

US$ continued downward as all major CBs are expected to extend loose money policies which should support an extended bull market environment.

Massive debt expansion to buy survivability during the downturn will be manageable if economic recovery continues since original expectations were worse than current conditions.
Gasoline demand is increasing, reducing inventories which is positive. Consumers are becoming increasingly mobile indicating social fears must be declining. Increased demand in summer is normal but the energy sector remains troubled. 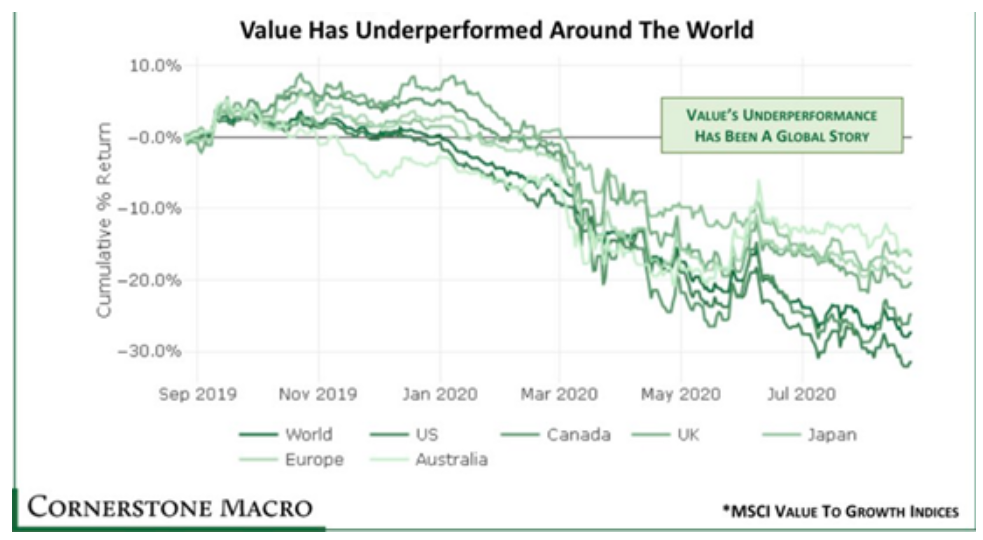 China continues is two-faced negotiations. After this week’s “positive” meeting, it tweaks the Administration by launching a couple ballistic missiles into the S. China Sea. U.S. adds 24 more firms subject to sanctions.

NYC continues facing unintended consequences of social distancing as its MTA expects to cut service by 40% due to reduced ridership and to increase fares by 5%. Clearly, the Governor and Mayor must have taken a non-traditional economics course.

Today is 109 market days from the 3/23 low.
Check for consistent ranking within the past 21 days for new commitments OR Jack’s 5-10 day rule as he explained in the session on 8-25.

Bonds & US$ drop with the new stock highs.

My momentum scans were below average without any particular bias. Without the promise of new stimulus, speculation has been diminishing.

TSLA & AAPL still attracting investors. Apparently, the DJI is being forced to adjust three components due to the AAPL split. A three component adjustment is rare.

RSI suggests the S&P is becoming increasingly overbought.  Major moving averages remain supportive at 20, 50 & 200-SMAs. Weekly chart reveals declining volume which is reason for caution. As I wrote on Monday, bears are harder to find. The put/call ratio yesterday was a bullish 0.62 indicating complacency. Another reason for caution.

Value is, as beauty, found in the eye of the beholder.  “It is easy to tell which of the following is more important in measuring the value of Amazon: warehouses (tangibles) or automated logistics systems (intangibles).” An AI driven value oriented ETF filed Friday (NVQ) changes the traditional value approach returning 13% YTD.

Substantial on-line presence has given major firms profits during the shut-down leaving small businesses without a developed web based sales platform even weaker. “Walmart, Amazon, Target, Home Depot, Lowe’s, and Costco accounted for 29.1% of all U.S. retail sales in the second quarter.”

Inflation fears have driven the 30-Year T to 1.42% with the Fed expected to ignore inflation above target for a while to compensate for the decade of low inflation.

Maybe AAL doesn’t have enough frequent flyer miles to hock for another loan. It will furlough another 19,000 when payroll support ends leaving a total staff reduction of 40,000.

Progress on the U.S.-China trade agreement passing the critical 6-month review eased market tensions. China will buy US made semi chips along with 40M tons of soybeans.