Whether a feisty Presidential debate is the reason for the STOXX to decline overnight may be a stretch. Nevertheless, as a leading indicator of investor sentiment, the NYSE will open down today. Perhaps the STOXX heard ECB’s LeGarde announced that overshooting inflation seems like good policy. Copycat.

Micron is dropping with news that it will cease sales to Huawei.

The 20-SMA has remained above the 50 since April. After plateauing for two weeks, last week’s activity resulted in the 20 rolling over. If it falls to a crossover with the 50-SMA, the intermediate term risk-off question will be resolved.

The “smart money” has been largely short the US$. A squeeze is about to happen which will drive it higher as hedgers are likely to be forced to buy to cover (BTC). A record trade deficit, record government and corporate debt along with a decline in the US$ share of global currency reserves does not generate a lot of confidence. Rumors of its death seem ill founded as there has been no constructive replacement by the Euro or the Renminbi.

JPM actually admits to manipulation in the metals market paying the largest fine ever for market rigging or “spoofing.” Usually, the agreement is to pay to settle with no admission of guilt.

NYC is a microcosm of what is happening in areas that have imposed continuing and massive shut down. Bankruptcies are up 40% and a third of businesses are expected to never reopen. After reducing staff by 100,000 in April, Disney is laying off another 28,000 which includes executive level staff. Two thirds of the staff are part-time. Dutch Shell joins the foray cutting up to 9,000 due to weak demand.

Changing business to adapt to the Covid environment has been expensive. Management is not likely to undo the changes.

On the world stage, apparently capitalism is good if it is green according to the head of the IMF who wants to “fix” capitalism which seems to me a forced transition to socialist-lite which is never enough of a shift.

From whence comes the catalyst for a bear market? The banks are better capitalized than in ’07-’09. Without additional funding and various extensions for mortgagees, commercia mortgage backed securities are increasingly at risk of default. If you have exposure, consider eliminating it from your portfolios. Boston Fed President recently said defaults are very likely.

Monday, the preferred dealer network, which has money from QE, was focused on buying index components. However, it was insufficient to suck in retail or many small manager transactions. Momentum was low though issues with upward momentum, while still below average, were finally greater than the declining issues. The primary institutional presence was HFT activity which was predominantly in lower priced issues which failed to generate retail investor follow through. Without a shift to strong positive investor sentiment, October’s historic risk level remains close at hand. A month of decline has likely destroyed capital, if not the enthusiasm, of the retail speculators of prior months. DPs will not drive this market to new highs without real earnings and better overall fundamentals.

Always looking for a reason that the market made a big move, yesterday may have been a repeat of Pelosi’s statements that a stimulus deal is possible. She did lower her plan to $2.2T, but it’s still much higher than will pass the Senate or the President. Investor enthusiasm waned overnight realizing hopes lacked reality. Futures have been flat with a negative bias.

The 20 & 50-SMAs are important benchmarks for bulls to maintain. The 100-SMA attracted what are typically longer-term investors. MACD & RSI sell signals of last month are turning up though they have not reversed to a buy signal. Lack of a new stimulus bill and rising Covid case count may renew clamping down economies potentially raising investor anxieties. 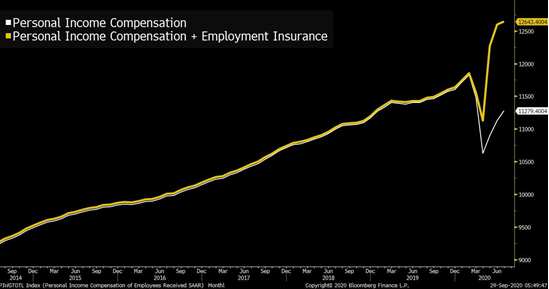 The goal of maintaining consumer spending has been achieved with the CARES Act though it did not keep many businesses operational. Unemployment insurance benefits have avoided a lot of household pain. Without extension, the yellow line is likely to collapse into the reality of the job market creating more demand for government largesse. 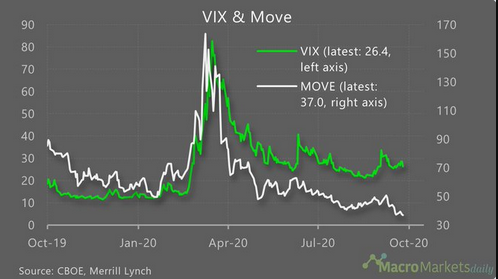 The VIX remains more than two times higher than its recent record lows from 2019 and early 2020. Similarly, the bond volatility (MOVE index) is at all-time lows as the Fed, via aggressive buying, has sharply reduced the daily trading range of U.S. Treasuries. Over the last ten trading days, the difference between the high and low closing yields for the ten-year UST was 2 basis points. Since 1962 the average ten-day difference is 22 basis points.

Beijing has four months to buy another $115 billion, or it will fail to uphold its end of its trade deal with the U.S.

I have repeatedly noted that deflation is the Fed’s biggest fear. The ECB’s LeGarde has expressed similar concerns for Europe. There are no financial tools to reverse deflation. Falling prices delay consumption which becomes a self-fulfilling cycle.

When John Hopkins reports global deaths passing one million, the media does not always make it clear that the 1M are not all in the USA sustaining high fear levels. We are testing more and should find more “cases.” There is no distinction when the “cases” are asymptomatic or the demographic implications which are primarily among elderly and health compromised population segments. Unjustifiable fear and economic damage has been created by poor data reporting and the lack of full disclosure.

Tonight’s Presidential Nominee Debate is for the undecideds and the media. Each party most likely has its base already.

A continuation of Friday’s S&P rally to close above the 50-SMA would, also, be a close above the 9/2-16 descending trendline. A reversal in Stochastics 8.3.3 would suggest a positive shift in sentiment. The indexes rose due to preferred dealer banks with QE funds supporting a few components rather than a broad participation. A break this week below 3200 would be decidedly negative.

Optimism returned to the Nikkei over the weekend which looked back to the ‘80s and surpassed its high. (Three decades of buy & holding works). By 6 AM EDT, the STOXX had added nearly 2%. The optimism is spreading into the NYSE for a likely gap up and the open.

Market rebound is not based on resolution in Congress for a new “stimulus” bill with nearly $1.5T between the House and the Administration’s proposals. “Federal Reserve Board Chairman Jerome Powell warned Wednesday that a lack of further fiscal support from Congress and President Trump could “scar and damage” a U.S. economy restrained by the coronavirus pandemic.” The Fed’s monthly $120B QE is not expanding the balance sheet but replacing maturing issues. “Market support” is suspended. “Two weeks ago, when the Fed published its latest monthly breakdown of purchases Secondary Market Corporate Credit Facility which shockingly showed that in the entire month of August, the Fed had not purchased a single corporate bond ETF and had barely purchased any corporate bonds in the open market, we asked if Powell was ‘sending the market a message.’

With the VIX-X not spiking, the selloff must be classified as orderly but the rally must be sustained above the 20 or the market correction may not finished with many fear generating issues unresolved.

The S&P rebounded off the 100-SMA. The 50 is important resistance. SPY, in pre-open trading, is above it with the 20-SMA the new resistance benchmark. GLD & USO are trading up within the downtrends which will be hard to change as US$ is also trading up.

The problems at JPM seem to never end as they pony up another $1B for profiteering at the metals desk. DOJ is using RICO as the basis of prosecution. As usual, all plead not guilty. A billion sounds big but not for JPM.

Apparently the high correlation between otherwise disparate assets is due to the lack of economic growth. Assets tied to the economy have struggled while speculation has offered the prospect of the larger returns. Moody’s believes a Biden win will be best for the economy because of expanded deficits. (Afterall, the government doesn’t have to pay its debts).

The China trade issue will be a long-term issue if Trump wins next month. The TikTok ban was delayed by court and China’s largest chip manufacturer has new export curbs.

AAL will lay off tens of thousands on October 1st without more funds from Congress. Air travelers are scarce and likely to remain so for up to five years according to IATA even though contagion probabilities are less than 1%.

We r now neutral QQQ.  The charts and indicators are inconclusive.  An argument can be mad for either, 100% long, or short.  The political news just keeps getting worse, and the 1st debate btw the Criminal and Ding-Dong is tomorrow night, and I’m sure it will move the market.  And then we have the Amy debate.  And the tax returns, and the list goes own.  I do believe it will break hard, one way or the other , soon.  At which time we will know which one to sell, and which one to keep.  This is the worst market I have ever seen, and makes 07/09 look easy.  Will keep u posted.  IJK, XLY, MGK, and ROBO r all very encouraging today.

We had a minor bounce yesterday inside the trading range within a continuing downtrend. BTD is a philosophy, a habit that is hard to break and not even good for you.

While index returns finished positive, the issues with momentum were decidedly negative and above average. HFTs are less active reducing noise in the scans.  The financial sector was the most heavily represented in yesterday’s selling data. The up days are weaker than the down.

The tech speculation has dried up with the biggest weekly equity outflow as investors pulled $25.8B from equities in the week ending 9/23. DPs are selling to lower inventory along with ETF sponsors reducing shares. Fridays usually have Pros closing positions. VIX-X is beginning to trend up.

Open down is in line with overnight market activity.

With the S&P trading around 3250, a look back at February reveals it is where the collapse occurred. The 50-SMA is resistance with the 100 (virtually the same as 12/31 close) & the 200 are possible supports.

The promise of a new stimulus relief bill from Pelosi perked up the markets. Discovery that the new $2.4T bill was still a long way from Republican proposals restored doubt that resolution was at hand.

“Whatever it takes” from the Fed is on a back burner with Mr. Powell reiterating to Congress the need for it to act generating a Reuters headline:  “FED’S POWELL SAYS EVICTIONS, MORTGAGE DEFAULTS COULD INCREASE IN ‘NOT TOO DISTANT FUTURE’ WITHOUT FURTHER FISCAL ASSISTANCE TO FAMILIES”. Additional comments indicated negative rates are acceptable to the Fed. The MSCF apparently needs to be reconfigured if it is going to provide more than .5% of its funds to small business.

JPM & GS have cut their estimates of GDP by half for next quarter and next year.

Oil prices have been staying close to $40 as global demands weakens and some OPEC+ members increase output. A strong US$ isn’t helping. Citi is ignoring US$ strength recommending rotation from Europe to EEM positions.

China’s Evergrande is the world’s largest borrower and facing likely default. It would be a major blow to the Chinese economy if financial fraud destroys the $120B in debt. “Roil, roil, toil and trouble.”

We have all dealt with retirement planning and overly optimistic return assumptions. Increased pension distributions may result in equity valuations declining due to demographics and unfunded liability problems.

I have been a skeptic about the probability of a vaccine this year. However, the Administration’s Warp Speed program of cooperation is generating breakthroughs faster than the normal development process. Conspiracies abound. Whether real or not research suggest public compliance is becoming increasingly difficult.