After the indices gapped down, intraday trading moved upward to end with a dirty gap on all three majors. The non-index stock universe is largely range bound. The last tax cut intercepted a bear market start in 2018 due to the business cycle. Market extension has been, as you know, focused on FANMAG issues rather than broad based advanced.

The September 2 high remains resistance with the 20 & 50-SMAs providing support for portfolios with differing levels of risk tolerance.

Employment rebound is slowing and while half the unemployed have returned to work, the remaining half will take an extended time for economic growth to reach a level that can absorb them. Vice Chair Clarida, also, stated that reliable home Covid tests would help general conditions, its development and accessibility remain unknown. Weekly jobless claims were higher than expected and did not include CA which did not report which would like cause the report to be worse. 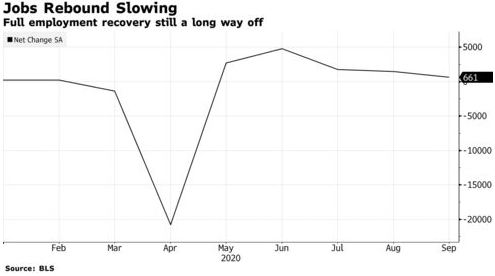 On the longer view of adjusting to global shut down, World Bank Chief Economist Carmen Reinhart defines the situation as a war with all governments involved in massive debt financing. However, “the scenario we are in right now is not a sustainable one.” The economic crisis is morphing into a financial one. She should know. She co-authored with Rogoff the research in to the GFC and published as “This Time is Different: Eight Centuries of Financial Folly.”

BA has some good news in that the Max has been cleared to fly in Europe by year-end as reviews are finalized.

Investment bankers have posted decent earnings but not from lending activity – the intent of QE funding. Traders received big bonuses based on last quarter’s performance. Currently, it is much more difficult to attract new money with the stimulus money gone so a HFT driven trading range persists. Earnings improved in part due to smaller loan loss reserves apparently believing Clarida’s comments that the recession is nearly over. Without another stimulus, the reserves may need ramping up in coming quarters.

Stocks in the financial sector are tightly tied to yields which remain suppressed by the Fed. The Fed’s plan for low rates and weak unemployment expectations will keep lending restricted as repayment risk remains high. Compliance is more difficult as traders WFH on laptops. Bankers are using keystroke tracking software for traders to watch for illegal activity.

WFH will soon have a double meaning as hotels work to repurpose facilities to Work From Hotel packages.